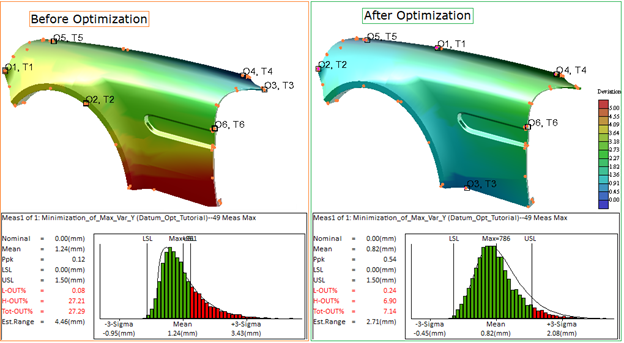 Why Selecting Proper Datums is Critical to Quality

Why Selecting Proper Datums is Critical to Quality

As Xing et al. [1] stated, there is little room to reduce variation in manufacturing aspects due to the fact that the current manufacturing level is already close to the precision-control limit. However, many efforts can be done to improve the assembly quality, such as optimizing assembly sequences, fixture locators, and key control characteristics [2-3]. Camelio et al. [4] showed that the positions of fixture locators play a crucial role in reducing sheet metal assembly variation given part and fixture variation. Xing et al. [1] demonstrated that the fixture layout of an inner hood structure was optimized by finding optimal datum features using a non-domination sorting social radiation algorithm which reduced the overall part variation in the assembly.

DCS has two optimizers for the assembly process; Sequence Optimizer to improve dimensional quality of assembly and throughput by reordering weld or clamp sequences, while also minimizing the travel distance of the weld gun or clamp operation, and Datum Optimizer, which is aimed at reducing rigid part variation or compliant part deformation caused by gravity and clamp operations by finding the optimal datum features from a candidate set.

Improper datum feature locations can cause large variation, unexpected mean shifts, and distort the part in certain conditions. Both mean shift and variation can cause a significant increase in the percentage of assemblies that are out-of-specification. Additionally, the Process Performance Index (e.g., Ppk) will be adversely impacted.

To demonstrate, the process of locating a fender to a fixture using a 3:2:1 locating scheme was simulated in 3DCS Variation Analyst Software. As shown in the left histogram in Figure 1, using initially selected primary datum features, the model produced a non-normal distribution with large out-of-specification range. Alternatively, as shown in the right histogram, the model using DO-optimized datum locators produced a quasi-normal distribution with much lower risk of out-of-specification conditions.

Figure 1: Before and After Datum Optimization

This example shows how important the proper datum features can be in the assembly process.

Previous Story
← 2020 in Review - Did You Miss Anything? Webinars, Articles, Whitepapers
Next Story
Understanding 3DCS Datum Optimizer Functions for Rigid or Compliant Parts →