What are Some Methods of Variation Analysis?

There are a number of different methods developed to both describe variation on models and drawings, as well as analyze and control the impact of that variation. 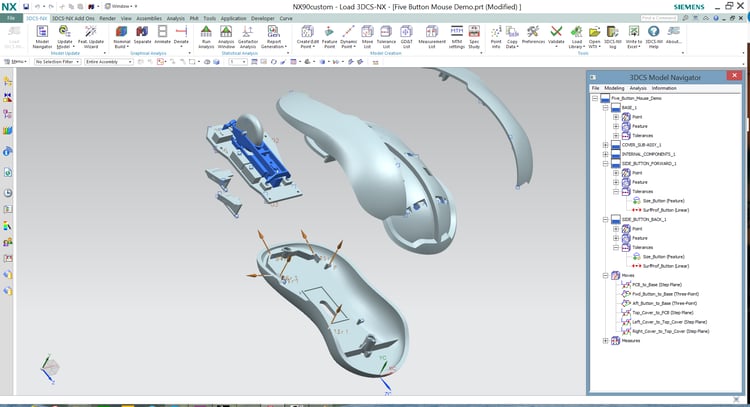 What Is Vectorial Dimensioning and Tolerancing?

Vectorial Dimensioning and Tolerancing (VDT) is a different method to specify dimensions and tolerances, in contrast to Geometric Dimensioning and Tolerancing (GD&T). The concept of VDT is to use a substitute element instead of the actual element in its calculations. The substitute element is a calculated geometrical ideal feature, such as a plane, cylinder, or circle. VDT avoids ambiguity in calculating location, orientation, and form variation for a specific feature.

Following the VDT notation, a vectorloop method assumes that real features can be accurately represented by 7- element vectors. Therefore, a much simplified method – Vector-loop Tolerance Analysis – can be utilized considering only location and orientation.

A state variable is the analysis system’s internal state representation, which may not always be measurable. In the StateSpace concept, any discrete-time system can be represented as a set of algebraic equations based on state variables.

y(k) is the output vector, matrix A(k) is the system matrix,

C(k) is the output matrix, b(k) and d(k) are constant vectors,

w(k) and v(k) are system noise vectors, and k is the time sequence.

A multi-station variation model can be devised by treating k as a station index instead of a time sequence. In this case, the state vector x(k) is now a stack of feature representations;

For example, the observability can be used to determine the minimum number of measurements needed. The controllability can be used in optimizing variation factors, station sequence, and station type. Interestingly, a feedback control mechanism can be designed for the automation of a production process.

What is the Stream-Of-Variation Analysis?

Stream-of-Variation Analysis (SOVA) is an analysis and synthesis framework for multi-station assembly processes based on station-indexed state-space theory. A SOVA system is utilized in modeling, analysis, synthesis and control of process variation for multi-station manufacturing systems.

The SOVA process model can be summarized as follows:

Keep an eye on the blog for more on SOVA later this week!

Interested in learning more about 3DCS and its application? Join our webinar series to see it for yourself!