This piece is based on the work done by DCS Dimensional Control Systems in cooperation with Dr. Jianjun (Jan) Shi at the University of Michigan and Drs. Darek Ceglarek and Shiyu Zhou at the University of Wisconsin - Madison, with the support of a two million dollar grant from the Advanced Technology Program of the National Institute of Standards and Technology.

SOVA is a method of applying variation analysis as part of the design and manufacturing process to drive robust design in order to reduce costs in manufacturing.

Developed in the late 90's and early 2000's and documented in the book "Stream of Variation Modeling and Analysis for Multistage Manufacturing Processes" (Jianjun Shi, 2006, CRC Press, ISBN 1420003909), it forms a basis for many of the programs DCS provides for customers and is similar to many process established by leading manufacturers in the automotive and aerospace industries. 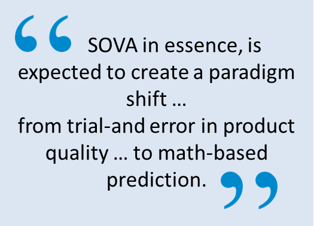 Stream-of-Variation Analysis (SOVA) is an analysis and synthesis framework for multi-station assembly processes based on station-indexed state-space theory. A SOVA system is utilized in modeling, analysis, synthesis and control of process variation for multi-station manufacturing systems.

The dimensional variation reduction and control has been one of the major issues, which have plagued many American manufacturing industries. High levels of variation causes:

(3) low production yield that is below design intent expectations.

All of these lead to high production cost, low profit margins, and eventually loss of market share and competitiveness. Some of the most critical factors and barriers in the competitive development and operation of modern production systems lie in the largely uncharted area of predicting production system performance/variation during design stage. Severe limitations in the current capability of process performance prediction tools have an enormous impact on the overall product realization cycle time.

The SOVA process model can be summarized as follows:

It is expected that for most manufacturers, shortening product cycle is becoming one of their most critical goals due to rapid changes in market demands.

For example, in the automotive industry, a product's life cycle will be shortened to 2-3 years in the next few years compared to the current 4-7 years and 9-12 years from a few years ago or even 20 years for some truck models. Additionally, market requirements cause reduction of new product and production system design development time.

Currently, it takes 24 months for the world’s top manufacturers to develop a new car (year 2000), with development time expected to be shortened to 12- 18 months within the next five years. Similar forecasts have also been noted within the appliance and consumer good industries.

The number of engineering changes after design stage in top domestic manufacturing design far exceeds the number of changes done by their top international competitors. For example, it is estimated that some top domestic automotive manufacturers reach 50-60% of "first time right" during design stage compared to 80% achieved by top international competitor. This causes significant barriers in realizing lean manufacturing strategies in the overall product development cycle. 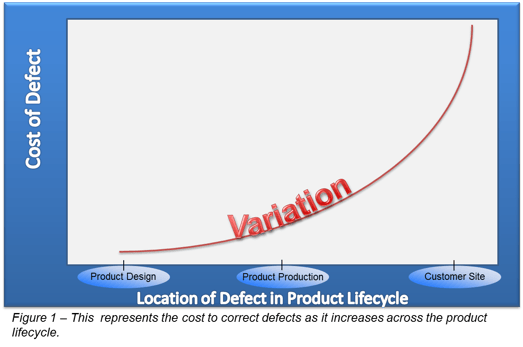 Additionally, it was reported that within the aerospace and automotive industries 67-70% of all these changes are related to product dimensional variation caused by a lack of technology for accurate prediction of process performance/variation during the product/process design phase. In fact, dimensional variation is introduced into virtually every design during manufacturing. Thus, the lack of a comprehensive technology like the planned SOVA system is the major barrier to further progress in new product and process development.

New production ramp-up/launch time is crucial in new product manufacturing. Major efforts during ramp-up are focused on identifying root causes of the process variation. However, current industrial practice in ramp-up time reduction is far less than satisfactory. All three of the aforementioned challenges and limitations can be addressed at the same time through accurate prediction and optimization of production performance (dimensional variation) during design phase and swift root cause tracking and problem solving during ramp-up time (pre-production and production stages), i.e., through a generic and efficient modeling, analysis, synthesis, and diagnostics of multistage assembly processes.

The overall goal of the SOVA system is to develop a new technology for precise modeling, analysis, synthesis and control of process variation for multistage assembly processes (MAPs). Although there are currently numerous design methods, statistical quality control tools, and system models available, none of these technologies can solve the challenges stemming from rapidly growing industry demands as described above.

The current practice can be characterized as follows:

Based on the extensive background in dimensional engineering, DCS will develop and demonstrate a functioning prototype of a generic simulation engine, called SOVA system, for modeling, analysis and synthesis, and performance prediction of MAPs where product geometry and dimensional variation are of critical importance. The kernel of SOVA system is an innovative stage indexed state space representation of the MAPs.

This generic representation allows for integration of the key product characteristics (KPC) and key process/control characteristics (KCC) in CAD/CAPP models with information about process layout, sequence of operations and production system observability (allocation of measurement gauges and position of measurement points for quality check). This model does not only capture the stream of variation in an MAP, but also enables the development of efficient techniques for variation reduction during both design and manufacturing.

The generic simulation engine within SOVA system serves: Simulation of production system performance (dimensional variation) during design phase. It includes not only variation propagation analysis, but also variation synthesis and optimization of KPC/KCC to obtain the best dimensional variation. This will help eliminate or significantly reduce the number of design changes currently needed after design phase. In-line fault identification and root cause isolation of a new product ramp-up time. SOVA will help shorten ramp-up of a new production by eliminating the current bottleneck through rapid identification and isolation of system failures.

The research of SOVA is highly interdisciplinary, involving design, control, and statistical analysis. The math-based state space model will be used as a framework to describe process deviation and variation propagation at both single station and multistation system/process levels. The state space model provides a quantitative framework for variation propagation analysis, diagnosis, and control in complicated multistage processes. Based on this model, advanced control theory and statistics will be used for optimizing process control and improving quality in both development and production phases.

SOVA can be applied to various multistage manufacturing processes, such as sheet metal assembly processes, machining, semiconductor manufacturing processes, etc. SOVA method will first identify, then analyze, and finally model various variation sources. The SOVA variation propagation model enables both forward analysis that predicts the system performance to improve the design and backward analysis that synthesizes the sensor layout and identify the root causes in the process. The SOVA simulation engine is leapfrog technology advancement for the modeling of variation propagation in multistage assembly process with rigid/compliant parts.

The advancement represented by this task serves the purpose of increasing the scope of the types of variation comprehended by the modeling system, as well as improving the ability of the system to exhibit responsiveness to dissimilar processes. Once developed, it will generate broad-based benefits and will achieve the following during: 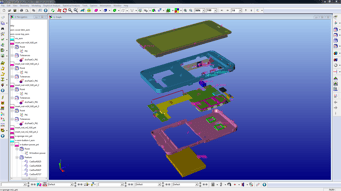 It will significantly reduce the time needed for dimensional fault identification and correction using FTRDiagnosis strategy through real time automatic fault identification, root cause isolation, and resolution and based on the SOVA model and product measurements. SOVA-FTRDiagnosis is concerned with the interface between design-intent information, and the data acquired during the prototype and launch phases. The development of this module represents a very high level of risk as it requires the integration of sophisticated control theory, advanced statistical analysis, analysis modules specific to the interpretation of Geometric Dimensioning and Tolerancing (GD&T), as well as new research recently completed at University of Wisconsin regarding the optimal placement of sensors.

The SOVA system will also allow for increase in production yield during full production phase through FTRDiagnosis of the system designed using FTRDesign. The FTRDiagnosis will minimize delays in finding root causes of faults and reduce ratio of incorrectly identified root causes.

The SOVA system will be applicable to various complex multistage assembly processes (MAPs) including aerospace, appliance, automotive, consumer goods, shipbuilding and electronics. Potentials for other component fabrication processes will also be shown. SOVA will be implemented and disseminated as a computer aided design and process diagnosis tool for manufacturing system engineers.

Interested in learning more about 3DCS and its application? Join our webinar series to see it for yourself!