2 Methods of Checking Your Assembly Sequence - LSA and DoF Counter

2 Methods of Checking Your Assembly Sequence in 3DCS

Two tools to validate your moves and assembly sequence in your 3DCS models. 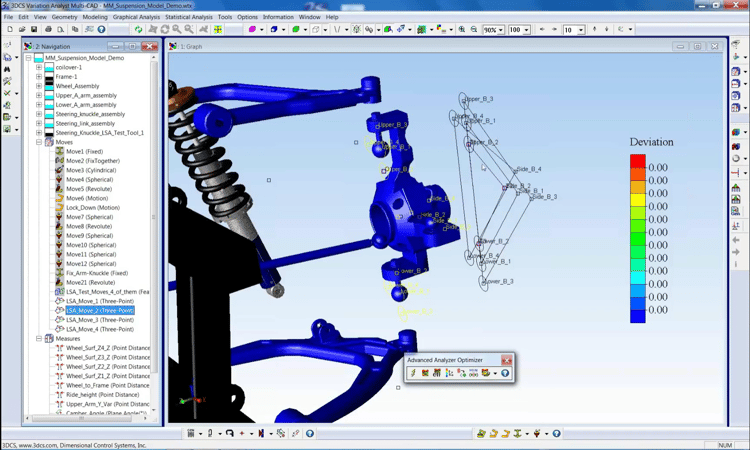 Analyze your locating features as part of advanced analysis. This allows you to view the various geometric effects of different locating setups or move operations. You can use this for a couple of different studies:

Analyze locators in advance to determine the effect of moving locators higher, lower, tightening or loosening. The analysis shows which move is most critical to the overall assembly, and determines whether a change has a positive or negative effect on your assembly variation.

Create different move patterns to determine which is optimal. This can be helpful for determining sequence of assembly, or what effect tooling has on the assembly compared to normal assembly.

The Degree of Freedom Counter determines how well constrained your parts are. This is important when setting up moves, especially Mechanical Moves, as parts need to be fully constrained to properly assemble.

There are two validation studies for the Degree of Freedom Counter that benefit you:

1. Check moves as  you build your model

It can be very helpful to check your moves as you build the model. This give you the opportunity to see whether each move is properly constrained before moving on to the next. In rigid body modeling, this is handy, but where it becomes most valuable is when building mechanical models. This is because mechanical moves are done in sequence; each move builds off of the previous move. What this means is that one bad move early in the chain breaks the entire sequence of moves in your mechanical model. A tool like this to check those moves can help reduce the chances of improperly constrained moves crating problems in your assembly and analysis.

2. Validate moves made by other team members before working on a model or running an analysis

Most design work is collaborative. This means that you often have a model with parts designed by other teams and professionals. The Degree of Freedom Counter gives you a quick way to validate that the product is properly built in 3DCS, and if not, which moves need to be addressed. This can save a lot of time later on when the analysis shows build failures.

Looking for more tips to build your model faster? Take a look at the 3DCS Essentials Webinars on the DCS Community to get tips and tactics to speed up the modeling process and build your models in record time.

Click the link below to view the first of the series:

or visit the DCS Community at http://community.3dcs.com