Tesla, a DCS Tolerance Analysis Customer, Has Made Waves

Tesla, one of Dimensional Control Systems’ valued customers, has had a good year.

[This post carried over from DCS's previous blog, in case you missed it] 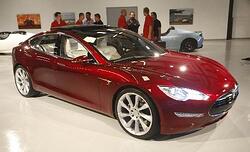 "One of the quickest American four doors ever built.”

That was how Motor Trend magazine described the Tesla Model S, this year’s Car of the Year. Motor Trends’ vaunted award holds a lot of weight, and the fact that all the judges unanimously agreed on the Model S speaks volumes for its performance and design.

The Model S is an all-electric car developed by Tesla Motors, situated in northern California. The Model S is the first of its kind to receive the award, as unlike the Chevy Volt, winner of 2011, the Model S does not contain any kind of combustion engine or power source. It runs only off of its large battery pack, giving it a nearly 200 mile range.

The Model S was up against some hard competition. BMW’s 335i series, the Cadillac ATS, and new models from Porsche and Lexus were amongst the competition, making this year’s choice even more difficult. The Model S still pulled ahead. With revolutionary designs, and 250+ patents to cover them, the Model S was developed around the idea of it being an electric vehicle. This ground up mentality has allowed its designers to change fundamental design features that have become the norm in internal combustion vehicles, but are not needed in all-electric ones.

Being an all-electric vehicle hasn't made the Model S shy in any regard. It leaps forward, going 0 to 60 mph in 4 seconds with a 362 horsepower powertrain, showing off its sporty edge. With seating for 7 and room under the hood, this hatchback doesn't miss out on storage or capacity, having comparable storage space to the Chevy Equinox.

The price for the Model S still stands high. At around $52,000 for the lower end model, and around $100,000 for the higher end, this still hasn't stopped Tesla from running a waiting list two years long.  At a price point to match high end BMW, Audi and Mercedes-Benz vehicles, the Model S is priced accordingly. (I personally wouldn't mind one priced a little closer to my wallet, but for a luxury, high performance, sports car that gets 78 mpg? I’m not the only who agrees that the price is well worth it).

To create such an incredible vehicle, Tesla had to place quality at a premium. They set out to make the best quality product they could, as entering the automotive market with such an established base would be difficult. Tesla utilized 3DCS Analyst as part of its quality process, taking advantage of tolerance analysis, variation simulation and assembly sequence simulation to reduce defects and costly changes down the road. The CEO of Tesla, Elon Musk, stands behind his brand such that he personally inspects each vehicle1.

Interested in more? Take a look at the full article by MotorTrend on their website, or read about Tesla's adoption of 3DCS tolerance analysis solutions here at Product Design & Development, or MCADCafe.

To learn more about 3DCS and how it can help your company save time and money click here.